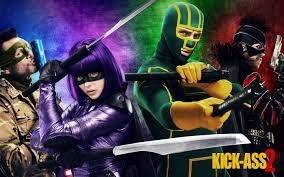 This review will kick some spoiler ass.

Kick-Ass 2 brings us back to a world that needs heroes and gives its audience crusaders they can identify with in an immersive rollercoaster of a wish fulfillment fantasy.

Director Jeff Wadlow does an amazing job of capturing the feeling and style of the first film, dropping the audience into the same world as though we had never left it.

This movie takes all the character development the characters went through in the first film and ramps the stakes up to eleven. It was such a joy watching these characters who were so endearing the first time around take the mission to the next logical level.

Kick-Ass two, like the first, plays a fine balancing act of comedy, drama, and comic book heroics and delivers an almost pitch perfect piece of pop art. The characters by real world standards are insane but the movie presents a world that is aware of this and let’s the audience in on the joke. In that same regard the movie also has an earnest message of finding inner strength and becoming a hero yourself .

The story finds Dave having temporarily retired from his activities as Kick-Ass finding mundane life boring and begging Hit-girl to train him.

Aaron Taylor-Johnson plays Kick-Ass as a stalwart Everyman who gives the audience a cipher by which to place their heart and emotions into the story. His earnest and sincere portrayal pulls us right into the movie.

Hit-Girl’s foster father,who is also an NYPD cop, finds out about her activities and makes her promise to stop. This leaves Kick-Ass looking for new partners in his crusade to make the world a better place. This brings us to Justice Forever.

Justice forever is a motley crew of street level crime fighters that form a solid core of supporting characters for Kick-Ass to play off of. The leader of the group is Colonel Stars and Stripes, an ex-mafia hitman who became a born again Christian and devoted his life to fighting those he used to work for.

While our heroes are forming Justice Forever, Chris D’Amico, formerly Red Mist and son of the mob boss Kick-Ass killed in the first movie, has sworn revenge and renames himself The Mother Fucker.

When The Mother Fucker forms his own super villain team and makes a plan to completely destroy Kick-Ass the plot comes to an explosive and action packed finale.

The cast gives amazing performances that are grounded, funny, and heart wrenching all at once.
The stand out being Jim Carrey as Colonel Stars and Strips who steals every scene he is in.

The films moves along at a break neck pace but luckily still takes time at key moments to let the raw emotions sink in. Chloe Grace Moretz gives an especially effective performance as Hit-Girl. She tries to turn her back on her calling as a superhero and lead a normal life but her subplot finds her living a Mean Girls style hell with over privileged debutants who are just as evil as the super villains she used to fight. Nothing will make me spoil how she resolves those issues.

Go out to your local theater and take a Kick-Ass ride!

One thought on “Kick-Ass 2: Electric Bugaloo”